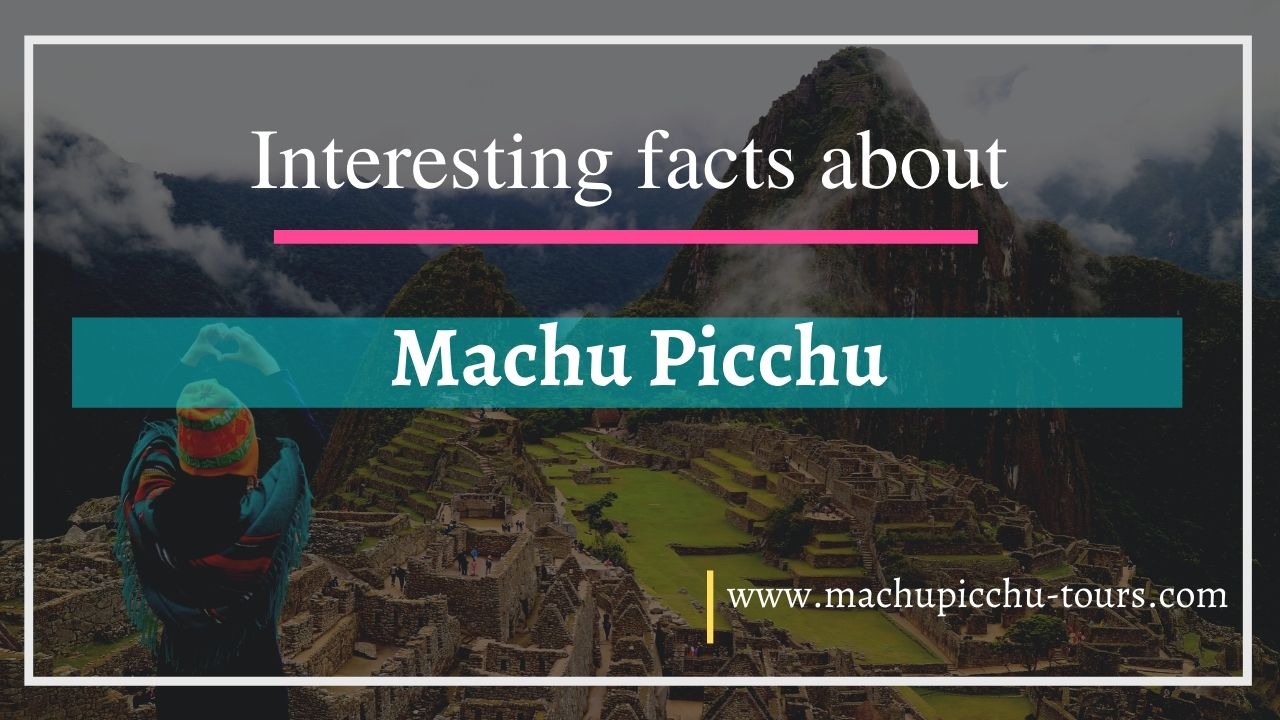 Machu Picchu is one of the world’s majestic and enticing handmade marvels. The ‘Lost City of the Incas’ dates back to the 15th century. It is one of Latin Americas largest historical sites. Not only is it bursting with culture, but is very friendly for the ambitious traveler.

Standing tall at almost 8000 feet (2430meters)above sea level, Machu Picchu attracts the mysterious soul. The Incas ruled over 10 million people. They were the last fully formed, indigenous civilization prior to Columbus’ arrival in the Americas.

Tucked well into the Andes Mountains, people travel from all walks of life to explore what makes this Incan city so intriguing. There’s a lot of mystery around its construction, purpose and population. If you’re still questioning where to go in Peru, read on the find out the 10 most interesting facts about Machu Picchu. Our travel agency in Peru offers the most memorable tours and trips, be sure to check us out.

1. When Was Machu Picchu built?

Although we cannot be certain of its exact date, evidence shows that Machu Picchu was built in the mid-1400’s. It was built during the reign Pachacuti Inca. This was a golden time period for the Incan Empire. The population was built into a strong, wealthy and reputable community.

2. Why was Machu Picchu built?

One of the interesting facts about Machu Picchu is that it was built for royalty. A place where Incan royalty would reside and meet with their inner circle, place where Emperor Pachacuti would retreat and entertain his family and guests. A place of happiness and prosperity.

Others understood the site was used for religious purposes. This was due to its strategic positioning amongst other religiously significant mountains. There is an excellent view of the sunrise and sunset. This supports the fact that the Inca believed the sun to be their divine ancestor. It is said that the Incas chose this location as it offered many advantages:

It is said this is where the Inca Culture essence was developed and maintained. The culture embraced the value of solidarity, reciprocity, labour, honesty, love and wisdom. This essence was spread along the entire Andean territory, creating a magnificent nation, highly organized and culturally advance.

Despite the remote locate, the Andean terrain provided comfort, wealth and prosperity for all. They were so successful in these endeavors that they overcame poverty, corruption and misery while at the same time, kept a profound respect for nature.

3. How Was Machu Picchu Built?

When we delve into the construction of Machu Picchu, many are left wondering how the Inca managed to transport materials up to the Andes Mountains, standing tall at 8000ft. Historians have confirmed that no ‘modern’ or ‘convenient’ methods were used during construction. The Incas made use of their best resources, themselves and nature.

Architects first drew their plans with the help of Pachacuti himself. As with any new build, scale models were constructed and base camps of operation were set up in the zone of Mandorpampa.

The construction of Machu Picchu continued for around thirty years. Although the build of this marvelous site took time, many of the Inca’s would carry the materials from bottom to top personally- taking up to 3 months at a time for larger materials. When its basic structure was finished, thousands of workers were free to leave.

For anyone planning do this trek, you will have a new found respect for those who had a hand in construction. Each stone was hand carved against another to perfectly fit well within the compounds of the city. The stones were smoothed and even to this day, you cannot fit a credit card through its gaps!

The city was built to keep royalty and lower-class workers separate. It was inhabited by a select few coming from Cusco and other regions of the Empire who came to carry out political, cultural and religious duties.

There were different tiers within the complex that held different purposes. For example, urban, agricultural, religious and working quarters.

The terraces built within the city were so profitable that food could be produced for over triple the amount that was needed. This was certainly down to its position and water drainage system.

5. What does Machu Picchu mean?

This is one of the most interesting facts about Machu Picchu. Machu Picchu or Machu Pikchu is a Quechua (Inca Language) word. It means “Old Mountain” or “Old Peak.” Broken down Machu means old or ancient and Picchu means peak.

The mountain that sits across from it is called Huayna Picchu, which can be translated to “Young Peak.”

Another interesting facts about Machu Picchu is that over half of its construction was underground. Not only did this provide a safe home for the Incas. This also incorporated a smart water drainage system along each level of the city- addressing any issues of rain or ground damage.

7. Is Machu Picchu prone to Earthquakes?

When we think of Peru’s position, the country is affected by earthquakes. It is a seismically unstable country. Both Lima and Cusco have been leveled by earthquakes. Machu Picchu itself was constructed atop two fault lines.

However, after learning more on how the city was constructed, the Incas had a very smart thought out process to address any issue hit by nature. And the proof of a successful plan is Machu Picchu itself. It stands tall and strong. If and when the city is hit, its stone might shake, but they fall directly back into place.

8. Who and how was Machu Picchu discovered?

In the book, Journey to Machu Picchu, Romulo Lizarraga, a grandson of Agusting Lizarraga. He lived in Aobamba valley near Machu Pichu had experienced the city in 1890. During his working day, he was clearing land for agriculture when he stumbled across a stone paved stairway.

Upon following it, he noticed that lying under thick vegetation was the lost city. He returned with his family to show them the gold and silver he found. Despite his family’s suggestion not to upset their ancestral and mountain spirits, he sold some valuable objects in Cusco.

This was a hidden capital to which the Inca had escaped after the Spanish conquistadors arrived in 1532. Over time it became famous as the legendary Lost City of the Inca. Bingham spent most of his life arguing that Machu Picchu and Vilcabamba were one. The theory wasn’t proved wrong until after his death in 1956. The real Vilcabamba is now believed to have been built in the jungle about 50 miles west of Machu Picchu.

Recent research has cast doubt on whether Machu Picchu had ever been forgotten at all. When Bingham arrived, three families of farmers were living at the site.

Upon discovery, Hiram Bingham documented his findings with the world. He also brought over 40,000 artefacts from the site back to Yale University. Only in 2012, were the artefacts returned to where they belonged.

Once upon a time, there were a total of eight entrances to Machu Picchu, with restricted access.

The first and best-known path is the Classic Inca Trail which originates from Cusco. It leads through Intipunku (Sun Gate). Another important trail is found behind Machu Picchu and crosses the Inca Bridge. The third trail runs parallel to the Urubamba River (Vilcanota River), connecting Machu Picchu to three narrower trails.

One crosses over the Puente Ruins, the other passes the temple of the moon. The last one goes through the Intiwatana and connects to the hydroelectric power station. This route continues up to Chaullay where it deviates to Vilcabamba. Then goes down the river to the jungle. Remaining entrances served as alternative routes in case of any natural disasters.

10.Why was Machu Picchu abandoned?

There is continued debate over the factors that led to Machu Picchu’s abandonment less than 100 years after it was built. Here are 3 of the leading theories:

The truth about why Machu Picchu was left behind may never come to light. Regardless of this great mystery, we often ask ourselves ‘Is time travel possible?’

Travel back in time and explore the ancient world available to us while we ponder its many mysteries. We hope through these 10 interesting facts about Machu Picchu we did uncover some mystery.